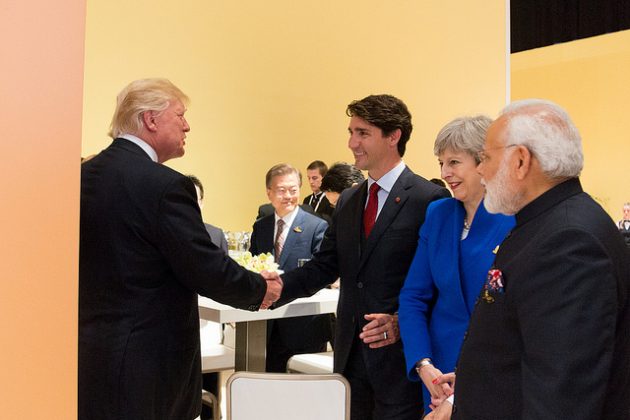 Donald Trump’s protectionist rhetoric throughout his campaign inflamed U.S. trade partners, and as president he has lived up to these principles.

Under Trump’s leadership, the U.S. has let the world know that it’s comfortable going it alone when it comes to trade. He pulled out of the Trans-Pacific Partnership (TPP), a multi-lateral agreement between 11 other East Asian and American countries that was expected to contribute US$131 billion to U.S. GDP yearly. That agreement is now going ahead without the U.S.

So what does this America-against-the-world approach to international relations mean for Canada?

The largest and most significant issue is the future of the North American Free Trade Agreement —renegotiations of the two decade old treaty are ongoing.

Trump’s public stance on NAFTA has fluctuated from saying it needs minor tweaks to threatening to tear up the deal, and the White House’s ambitious expectations for the negotiations have helped make trade talks a tough go.

Trump has already levied duties on Canada’s softwood lumber industry, up to 25 per cent in some cases, so his bellicose attitude on trade is not just bluster. When it comes to crafting the trading relationships with his country’s neighbours, the man who wrote The Art of the Deal is definitely playing hardball.

So what do we do? Many trade experts have suggested shifting our focus away from the U.S. and towards other lucrative markets, and the activities of the Trudeau government seem to suggest just that.

Our prime minister has embraced CETA and the EU wholeheartedly, has pushed forward with the U.S.-less TPP and has been aggressively pursuing closer ties with China—there have even been exploratory talks seeking a free trade agreement between China and Canada.

However, our trade relationship with the U.S. is still incredibly important, and even if Europe, China and other emerging markets siphon off bits and pieces of our trade with the U.S., the remaining balance will still be enormous.

The U.S. is our largest trading partner, and it will be for the foreseeable future. It’s a relationship that’s prosperous to both countries, and it’s worth fighting for.

If you are looking to export to the U.S. for the first time but are anxious about the trade climate, remember that regardless of what happens to NAFTA we will still trade heavily with the world’s largest economy. There will still be opportunities a plenty for Canadian firms willing to take advantage.